Welcome to my personal videomapping project on objects. This was a test were I imagined Ndovu would have commissioned me a video mapping for the launch of the new red brew of Ndovu. So I created a projection on a real bottle of beer that would show the history of Ndovu and finally evolving in the reveal of the Ndovu Red. Th

The installation is meant to be used in events and can be virtually scaled on any object (even buildings). It has a creativity part (the content creation) and a technical part (the projection) both equally important. This one was set up in the studio of AIM group, projected on a real bottle of Ndovu painted white and shown to various spectators. I apologise for the recording I am showing here now, it was done with a mobile phone cause I was not thinking initially to show it online, but the public that assisted to the experiment were so impressed that convinced me to show it. Of course live experience is much more impactful than watching this video. 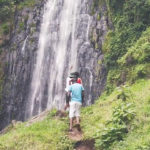